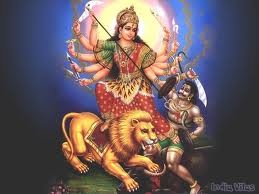 Durga, also identified as Adi Parashakti, Devī, Shakti, Parvati, Ambal, Kali, Lalitha and by numerous other names, is a principal and popular form of Hindu Goddess. She is the warrior goddess, whose mythology centers around combating evils and demonic forces that threaten peace, prosperity and dharma of the good. She is the fierce form of the protective mother goddess, willing to unleash her anger against wrong, violence for liberation and destruction to empower creation.
“Durga Puja” is performed for 9 days as “Navarathri“. It is scheduled per the Hindu lunar-solar calendar in the month of Ashvini, and typically falls during September or October.
The day of Durga’s victory over Mahishasuran, the evil demon is celebrated as “Vijayadashami“,”Bijoya”, “Dashain” or “Dussehra” (in Hindi) – these words literally mean “the victory on the Tenth day”.
Lalitha Sahasranama Stotran is a sacred text of the Hindu worshipers of Goddess Lalitha Devi, considered to be a manifestation of the Divine Mother Shakti or Goddess Durga / Parvati / Mahakali.
“Lalitha” means “She Who Plays”. In the root form, the word “Lalitha” means “spontaneous” from which the meaning “easy” is derived and implicitly extends to “play”.