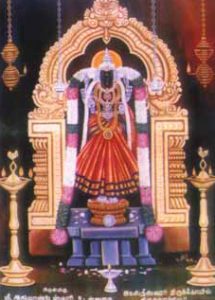 Parvathi, the daughter of Himalayas, is the consort of Siva. She represents the Universal power (Sakthi) that is the primary activating energy in the self-revelation of the Absolute. Other common names of Parvathi are Sakthi, Parvathavardhini, Rajarajeswari, Meenakshi, Kaamakshi, Visalaakshi and Lalitha.

I bow to the Mother Ambika, the supreme Goddess, Who is served by Saraswathi and Lakshmi. Ever auspicious, She is like the wish full-filling tree and Who is dear to Siva, the Lord of Kailaash. Her splendor, illuminates and explains the ultimate philosophy of the Upanishads. She gladdens the hearts of the learned. I bow to the Supreme Goddess, the queen of all queens, Who dwells on a bejewelled thronet, over the esoteric design of Sri Chakra.

In Siva Vishnu Temple, Parvathi is in the form of Parvathavardhini, representing the consort of Siva in the form of Ramanathaswami, as in Rameswaram. The shrine is built in Chola style architecture.

Fridays are very auspicious to Parvathi. The first three days during the Navarathri festival are celebrated for Parvathi. Meenakshi Kalyanam is celebrated on the Chitra Poornima day. Bhagavathi Seva is performed during the months of Makara and Karkata.

We worship the Supreme Goddess; Salutations to the consort of Rudra. May that Goddess Gowri (Parvathi) stimulate our intellectual faculties.