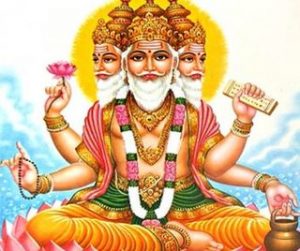 Brahma is the first god in the Hindu triumvirate, or trimurti. The triumvirate consists of three gods who are responsible for the creation, upkeep and destruction of the world. The other two gods are Vishnu and Shiva.
Vishnu is the preserver of the universe, while Shiva’s role is to destroy it in order to re-create.
Brahma’s job was creation of the world and all creatures.
Brahma has four heads and it is believed that from these heads came the four Vedas (the most ancient religious texts for Hindus). He has four arms and is usually depicted with a beard. Brahma’s consort is Saraswati, goddess of knowledge.