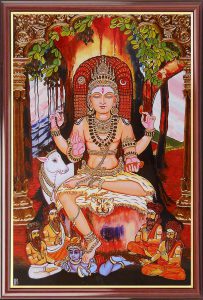 Sri Dhakshinamurthy is believed to teach through “Para Vak”, which is a divine speech form inaudible to worldly ears and resides in the recesses of silence. Ordinary expressions are not need to grasp the teachings of Sri Dhakshinamurthy, who explains the true meaning of Bhramaan naturally. His disciples are Rishis and Sages. He imparts the greatest awareness, understanding and comprehension.

Chanting of Sri Dhakshinamurthy Gayathri mantra is one way of revering him. So powerful and auspicious is the stotram, it is believed that one who understands it and chants devotedly is freed of bondages and realises truth.