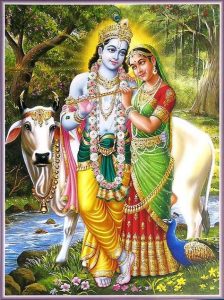 I am the goal, the sustainer, the master, the witness, the abode, the refuge and the most dear friend.
I am the creation and the annihilation, the basis of everything, the resting place and the eternal seed.
-Bhagavad Gita – Chapter 9- The worship of Krishna is part of Vaishnavism, a major tradition within Hinduism. Krishna is considered as the eighth avatar of Lord Vishnu.
The name “Krishna” originates from the Sanskrit word Kṛṣṇa, which is primarily an adjective meaning “black”, “dark”, or “dark blue”.The waning moon is called Krishna Paksha, relating to the adjective meaning “darkening”.The name is also interpreted as “all-attractive”.
Krishna is often depicted wearing a peacock-feather wreath or crown, and playing the “Pullankuzhal” (Flute). In this form, he is usually shown standing with one leg bent in front of the other in the Tribhanga posture. He is sometimes accompanied by cows or a calf, which symbolise the divine herdsman “Govinda”. Alternatively, he is shown as a romantic and seductive man with the gopikas (milkmaids), often rendering music or playing pranks.
According to the epic Mahabharata, Krishna becomes Arjuna’s charioteer for the Kurukshetra War, but on the condition that he personally will not raise any weapon. Upon arrival at the battlefield, and seeing that the enemies are his family, his grandfather, and his cousins and loved ones, Arjuna is moved and says his heart will not allow him to fight and kill others. He would rather renounce the kingdom and put down his Gandiv (Arjuna’s bow). Krishna then advises him about the nature of life, ethics, and morality when one is faced with a war between good and evil, the impermanence of matter, the permanence of the soul and the good, duties and responsibilities, the nature of true peace and bliss and the different types of yoga to reach this state of bliss and inner liberation. This conversation between Krishna and Arjuna is presented as a discourse in the “Bhagavad Gita“.
The Bhagavad Gita is an intensely spiritual work that forms the cornerstone of the Hindu faith, and is also one of the masterpieces of Sanskrit poetry. It describes how, at the beginning of a mighty battle between the Pandava and Kaurava armies, the god Krishna gives spiritual enlightenment to the warrior Arjuna, who realizes that the true battle is for his own soul.