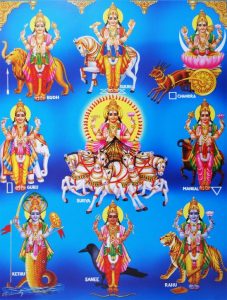 According to Hindu Mythology and Astrology, the positions of the nine planets in the twelve constellations of the zodiac and their movements are considered to be quite significant.

The Navagraha Stotram is written by Rishi Vyasa and is considered to be the peace mantra for the nine planets. They are powerful mantras which can pacify the Navagraha and protect the practitioner.

NavaGraha Stotram
“Nama Suryaya Somaya Mangalaya Budhaya Cha,
Guru Shukra Sanibhyascha, Rahava Kethave Nama”
The Navagraha Stotram is intended to help any person suffering from the negative effects of the position of any of the nine planets in one’s birth chart. By regular recitation of the mantras, you can please the planet lords and get favorable results from them.

I bow down to the sun who is red like the flower of Hibiscus, who is the son of Kasyapa, who is the enemy of darkness, who destroys all sins and who has a splendid radiance.

I offer my salutation to Lord Soma who is white in color like snow, yogurt and icebergs, who adorns the head of Lord Shiva and who rose from the Ksheasagar.

I pray to Lord Mangal who shines like lightning, who is born of the Earth, who holds a weapon named Shakti in his hand and who is called Swami Kumara.

I offer salutations to Budhan who has an incomparable beauty, who is very wise, the one who is the son of Soma and the one who possesses charming and noble characteristics.

I bow down to the son of Bhagu, the Shukra who is the spiritual master of asuras, the greatest teacher of all the learning, the one who shines like snow and jasmine.

I pray to Ketu, whose appearance resembles that of flower Palaasha, who is the head of all stars and planets. Lord Ketu is violet and fierce.